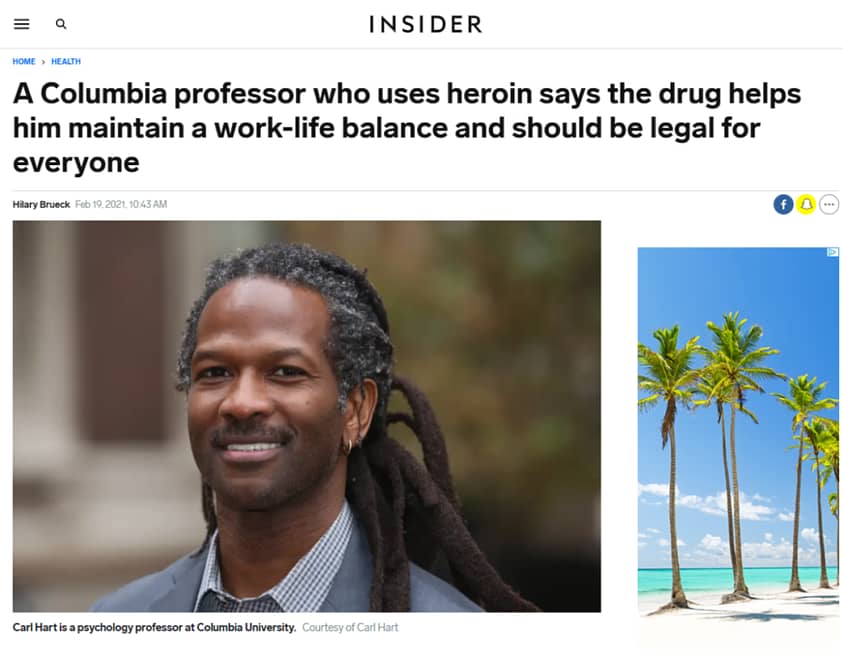 TREASURE ISLAND, Fla. – The founder of Footprints Beachside Recovery Center in Treasure Island had strong words for a tenured professor at Columbia University and called on the professor to be fired, according to a news release issued by the addiction treatment facility on Tuesday.

Late last week, an article published by Insider.com highlighted a new book by Prof. Carl Hart, a professor of psychology and neuroscience at Columbia University. According to the article, Hart advocates for recreational drug use, including the use of heroin and decriminalization of illicit drugs, in his new book titled Drug Use For Grown-Ups, Chasing Liberty in the Land of Fear.

“My heroin use is as recreational as my alcohol use,” Hart writes. “Heroin is one of the tools that I use to maintain my work-life balance.”

At one point, Hart ponders what is wrong with a “few lines (of heroin) by the fireplace at the end of the day?”

Experts at Footprints Beachside Recovery Center say those ideas are wrong and dangerous to espouse.

“We’re talking about heroin here, not an entry-level drug, but a hardcore opioid. Collectively, opioids have killed more than 750,000 people in the U.S. over the past two decades,” said John Templeton, founder of Footprints Beachside Recovery Center. “This guy is certifiably out of his mind. It’s both extremely dangerous and irresponsible to try to normalize recreational heroin use, especially in the midst of a national opioid epidemic and crisis.”

According to a report issued by the United Nations Office on Drugs and Crime, heroin is arguably the most problematic drug in the world, and more users die each year from problems related to heroin use, and more are forced to seek treatment for addiction, than for any other illicit drug.

“We know that heroin is exceedingly dangerous, even more so that pharmaceutical opioids, and add to that, most of the time people have no idea what it has been cut with,” said Templeton. “When people are addicted, and lucky enough to still be alive, we regularly see that they have lost everything in their lives due to heroin, and once you’re dependent, you cannot stop without professional help.”

Beyond the potentially fatal consequences to the user, the U.N. report also suggests that those who use heroin are indirectly helping to fund organized criminal enterprises, human traffickers, insurgent groups and terrorist organizations.

“There’s a reason so many organizations have implemented drug testing and zero tolerance policies,” said Templeton. “Teaching at a university should absolutely be a position where the individual responsible for educating others should be sober. When you’ve seen the deaths, the loss and the pain we have seen over the years at Footprints, it’s my opinion that Mr. Hart should no longer be allowed to teach in a classroom, given his self-professed admiration for casual and recreational use of heroin.”

Founded in 2008, Footprints Beachside Recovery Center is a small, private, holistic substance abuse treatment center for adults and is located in Pinellas County, Fla. Footprints provides specialized treatment plans for patients from throughout the U.S. and around the world. Opioid addiction recovery programs at Footprints focus on ensuring safe withdrawals and often combine holistic treatment with medication assisted therapies to reduce cravings and provide more successful recovery outcomes for patients.

For media-related interview requests, please contact our PR firm at 813.279.8335 or by emailing [email protected].