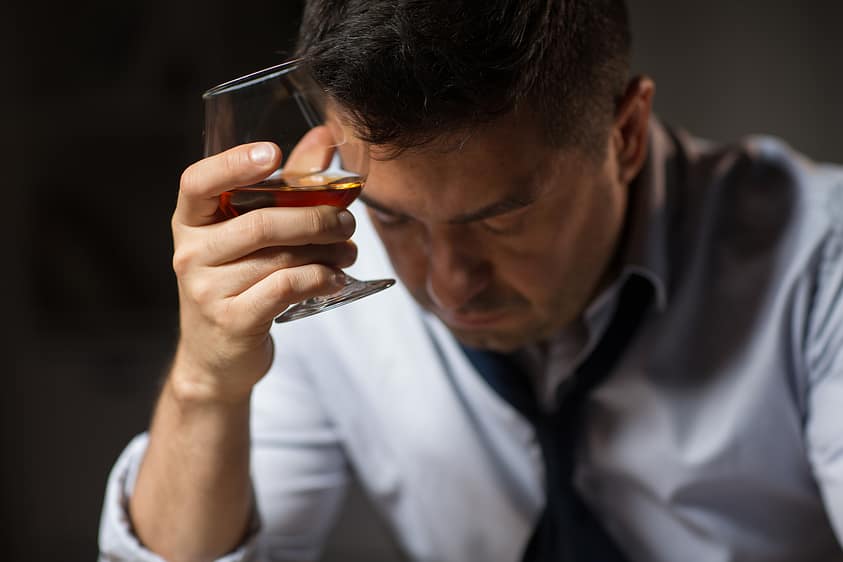 When you take that first sip of alcohol, it goes to your brain in only 30 seconds and has instant short-term effects. It will alter your mood, slow your reflexes, and disturb your balance. While the occasional glass of wine isn’t cause for concern, the cumulative effects of drinking can take its toll. Heavy drinking can lead to a dependency, which will have serious consequences on every part of your body.

What is Heavy Drinking?

Some who have excessive alcohol consumption habits can develop a physical and emotional dependency on alcohol. If you are worried about the amount you drink and concerned about the possibility of addiction, look for these signs and ask for help:

Over time, alcohol can have detrimental effects on the body and can even cause fatal damage. Alcohol doesn’t just affect your everyday life (such as your job, relationships and finances), but prolonged use can damage every part of your body.

The brain cells will start to shrink and your entire brain will get smaller as the frontal lobes shrink. This affects your ability to think, learn and remember. It is also more difficult to maintain body temperature and control your movements.

Long-term use affects the liver’s ability to break down and remove harmful substances from your body.

Chronic, heavy alcohol users can develop heart issues. In fact, chronic alcoholism is one of the leading causes of cardiovascular disease.

Because alcohol is classified as a carcinogen, those who have a dependency are more likely to develop cancers such as:

Alcohol can change your behavior and leave you without the mental clarity to make smart decisions.

Those with alcoholism have a hard time fighting bacteria and viruses, and could be more susceptible to pneumonia.2

Too much alcohol can cause yellowing of the skin, decreased body hair, and spider veins.

Alcohol can lead to malnutrition as it can block absorption of important vitamins and minerals. It can also cause other stomach problems like:

Why Does Your Stomach Hurt After Drinking Alcohol?

alcohol and digestion share a close link. You might know that your stomach produces acid to help digest nutrients. But did you know that the level of acid in your stomach needs to maintain the right balance?

In the short term, drinking alcohol causes your stomach to produce more acid. The extra acid can cause pain, vomiting and in severe cases, even bleeding. But that’s only the start of the damage that alcohol can cause in the stomach. Your stomach is also covered with mucous cells that keep the acid from causing internal damage. With one episode of heavy drinking, you can damage those mucous cells. Then, your stomach acid causes inflammation right in the lining of your stomach.

While the issues we mentioned above can cause discomfort, they are easier to deal with than the long-term damage excessive drinking can cause for your stomach.

Gastritis is when your stomach lining becomes inflamed, risking additional infections in your body. What does alcohol have to do with it? With frequent heavy drinking, alcohol erodes the lining in your stomach like we mentioned above. This is known as Alcohol Gastritis, and it’s common for those suffering from an alcohol addiction.

As the stomach lining becomes more inflamed, your risk of more dangerous issues increases. Alcohol Gastritis can cause gastrointestinal tract bleeding. This is considered a major medical emergency and requires immediate medical attention to resolve it. If the bleeding and stomach lining erosion continue as a result from drinking, surgery is often needed to repair the damage.

It’s easy for people who abuse alcohol to get caught in a painful cycle with stomach ulcers. Excessive drinking makes it more difficult for stomach ulcers to heal. And if someone is suffering from an alcohol addiction, it can be challenging to cut back long enough for the condition to heal.

One of the worst stomach problems caused by drinking alcohol is gastric cancer. But according to a variety of studies, your risk is only increased if you’re a heavy drinker. That means you’re consuming four or more drinks per day. It’s important to note that men are more likely to develop stomach cancer from excessive drinking.

Do you remember the H. pylori bacteria we mentioned earlier? The more time that bacteria is exposed in your stomach, the higher risk you have for stomach cancer.

How Alcohol Affects the Pancreas

The main function of the pancreas is to produce two essential substances that are vital to proper health and digestion. The pancreas produces digestive juices intended to help break down food, and also produces hormones, such as insulin, that aid in digestion and regulate blood sugar levels.

Over time, drinking in excess can cause the pancreas to produce toxic substances instead of healthy ones. These substances can lead to an inflammation of the pancreas, a condition known as pancreatitis. Alcohol use is the leading cause of pancreatitis and the risks are even higher for individuals who also smoke.

Due to the dangerous effects of heavy alcohol consumption, alcohol’s effects on the pancreas can sometimes be felt suddenly. The pancreas becomes inflamed, and can stay that way for a few days. This type of pancreatitis is usually temporary and doesn’t cause permanent damage. However, it can lead to more serious conditions, such as kidney failure, if left untreated.

Some symptoms of alcoholic pancreatitis can include:

Developing chronic pancreatitis can happen when the pancreas becomes inflamed and stays that way. This typically causes it to stop working properly altogether. This type of damage from alcohol abuse can be difficult to treat and can cause complications that are life threatening. In some cases, people develop different types of cancer (pancreatic cancer being a major risk), diabetes or kidney failure.

While it can differ from person to person, prolonged alcohol abuse can lead to repeated episodes of acute pancreatitis. Eventually, this can cause permanent, irreversible damage to the pancreas and leave you with a chronic health condition.

On a positive note, studies have shown that quitting alcohol use can stop further damage to the pancreas and increase the chances of finding some form of recovery from the disease. Addiction recovery is the best course of action for someone suffering from pancreatitis.

Alcohol is the most commonly used addictive substance in the United States. It can be difficult to avoid mostly because it is at the heart of many social gatherings. Because it can literally affect every organ in your body, early treatment for alcohol addiction is crucial. Footprints combines traditional treatment with holistic approaches to help you overcome your addiction. Contact us immediately if you believe you need help, and get started on the path to a healthy life.