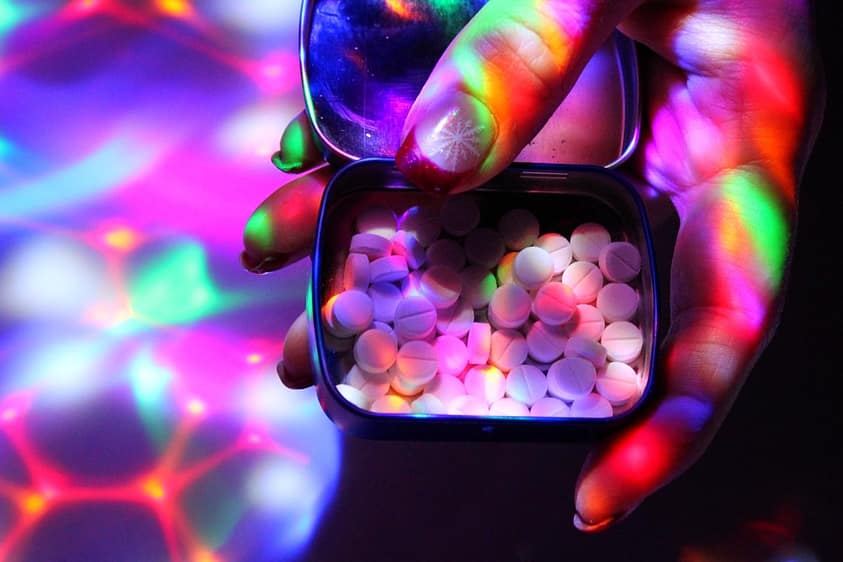 Ecstasy, also known as MDMA, is a lab-made or synthetic drug that impacts physical and mental health. Though its temporary mood-enhancing effects make ecstasy one of many popular party drugs, the dangers of ecstasy last much longer and can be life-threatening. An ecstasy addiction treatment program provides essential support, starting with detox and withdrawal and lasting throughout the recovery process. Though ecstasy is a highly addictive substance, recovery and healing are possible.

What Is Ecstasy and How Does it Encourage Addiction?

Ecstasy belongs to a class of drugs known as stimulants, which speed up the central nervous system and increase physical energy. Ecstasy can act as a hallucinogen or a drug that affects how you perceive the world. People under the influence of ecstasy may have enhanced sensory experiences—sounds and sights may be clearer. They may also have a distorted perception of time. Additionally, ecstasy can increase the “feel-good” brain chemical serotonin, which gives people warm, companionable emotions.

People enjoy the energy boost and mood enhancement they experience after a dose of ecstasy, and they may seek out this feeling repeatedly by taking more and higher doses. Ecstasy is also a common party drug or recreational drug. People who use ecstasy recreationally may develop a pattern where they take the drug repeatedly or “binge” over some time, followed by periods of abstinence.

The Physical Dangers of Ecstasy Use

Some short-term dangers of ecstasy come from periods of withdrawal between ecstasy binges. During these periods, users experience uncomfortable and unhealthy side effects, including:

While some symptoms can come and go, others have permanent consequences. Arrhythmia, for instance, can eventually lead to heart disease or heart failure. Even a single dose of ecstasy can reduce the heart’s efficiency in pumping blood.

Since people often take ecstasy as a party drug in warm, crowded environments with increased physical activity, there is extra pressure on the heart and nervous system. A person’s heart may already be working extra hard in these environments, and ecstasy increases the risk of permanent heart damage and dehydration from physical exertion.

For people with pre-existing health conditions, like diabetes, high blood pressure, epilepsy, or depression, ecstasy can be even riskier than it is for others. Ecstasy can affect physical and neurological systems that are already vulnerable.

After repeated use, the dangers of ecstasy multiply and can contribute to serious, life-threatening conditions. Ecstasy users put themselves at risk for:

Cognitive decline is another potential danger of ecstasy. If someone uses ecstasy heavily for several years, their brain may not be able to function normally.

Many of these short-term and long-term health problems result from combining ecstasy with other substances, like caffeine, alcohol, marijuana, and some prescription medications. Substances like alcohol and cocaine are often used along with ecstasy, making the user even more vulnerable to health risks.

Temporarily, ecstasy improves a user’s mood. But after repeated or prolonged use, other behavioral symptoms emerge that are more harmful to overall health.

A person who uses ecstasy may experience behavior and mood changes like:

Ecstasy damages the brain’s ability to produce serotonin, which is linked to mood regulation. The brain has a limited serotonin supply, and ecstasy use can cause the brain to deplete its supply quickly. A lack of serotonin can lead to depression, anxiety, and memory problems.

Your health and well-being are our top priorities. Our intimate, family-run rehab center ensures each client gets the individualized care they need. Supervised detox and withdrawal help people get through ecstasy withdrawal symptoms safely and as comfortably as possible.

Treatment plans are tailored to each client. Our beachside Florida treatment center offers therapy with licensed mental health professionals, nutrition education, a wide range of holistic activities like yoga and meditation, and more evidence-based interventions to help you heal from ecstasy addiction.

Don’t let the dangers of ecstasy take over your life or the life of a loved one. Help is available. Call 727.513.5972 or reach out online to learn more.